Sunday July 5 continued- Lucy and I took our dinner at the "King's Crown", a tented bakery that had set up not far from the hospital. We bought two pieces of bread that bad been baked with fat sausages inside them. They were fantastic! We also purchased two large molasses biscuits, I never got to taste either of them. I gave one away to Lucy and the other to Dr. Clift who had been so gracious as to feed us for the past few days. I love molasses cookies, I console myself by imagining that they were stale and hard and barely fit to eat.

Some of the King's men marching. The fellows that pass at the end are the Independent Company! Red with green facings.
At one of the clock, we took the field behind the soldiers again. This time, I took young Melton and went right, Clift taking mr. Melton and going to the left. We moved up and down the lines checking for the injured. 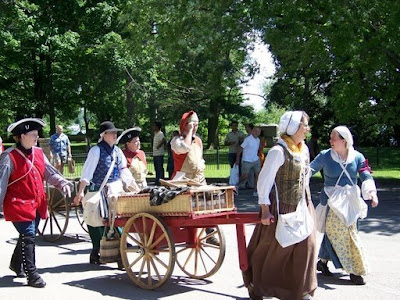 Marching toward the field of battle again with the 'mollies'.
There is a certain rhythm to battle that one must be aware of in order to move about. I could watch the French dodge up and down behind their lines to fire. I could imagine that there was a French commandant giving them orders to rise and fire then to drop back below the earthen wall. So long as I was not in their path when they fired I could move about freely and retrieve the wounded. 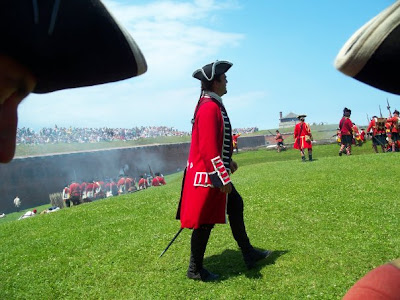 One of the British commanders during the final battle as seen from the Ind. Co. line.
I was moving behind a long line of green coated rangers on their knees and firing when the French line rose and I was directly in the path. They fired and I was struck by a glancing blow to the left knee!

Young Melton came out to retrieve me and took me back to the cart. "Are you alright?" he asked me.

All I could think to reply was, "I wasn't paying attention."

Clift came over and assisted me in tightly bandaging the knee to stop the flow of blood. I sat on the back of the cart for a few moments and realized the British line was advancing... and moving forward farther than I had seen them go previously, there would be wounded. 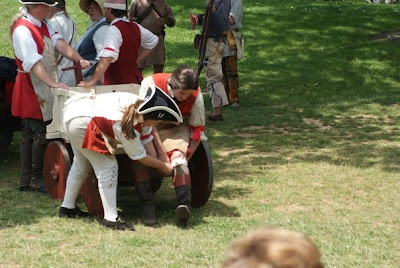 Dr. Clift assists me in bandaging my knee.
The muskets made a sound I had not previously heard, perhaps it was my new proximity to them that brought on this new perspective. 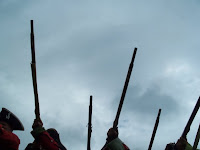 I got to my feet and made my way back out, young Melton aiding me along here and there. Melton moved in front of me in aid of one fellow and I took another. He was one of the green-clad rangers that I had seen earlier. I put his arm around my shoulder, "You're going to have to try lad," I implored him, "I am in no condition for this."

We both limped back toward the cover of the shade tree where the cart sat. Half way to our goal, his legs gave out, as did mine, we tumbled like wrestling school-children. We dragged in the grass a bit before getting upright again and completing out journey.

The line moved forward again, and the line of French soldiers that had been the furthest forward was gone. I could see British troops right up near the brick wall of the fort itself. The tide was turning in our favour!

Once we had evacuated the wounded from the field, the brothers Melton and Dr. Clift insisted that I be carried back to the hospital on the back of the cart. Clift examined it in the shade of a tree that was located just on front of where we had placed the hospital fly.

I was fortunate in that I was able to tell Clift when I needed a moment and when I could continue through the pain. There was a good deal of blood on the back of the cart, and I joked to Clift that I was quite unaccustomed to seeing so much of my own all in one place.

We tied it up tight enough to make the march into the fort for the official surrender by the French.

There was a great deal of marching in long lines on the part of the French and the British before the actual ceremony of surrendering began. Once begun, the French commanders met the British in the middle of a parade on the fort grounds. Clift and I were unable to see from our particular vantage point.

Once it was over the British allied natives marched about the French officers and made the most frightening sounds and cries. My mind was on one thing only... the FRENCH hospital!

Once the French soldiers had begun to make their way out to the boats to be taken away, I went up the way as fast as I could into the building known as "The CASTLE " and found the large room they had set up as the hospital. Clift followed behind me. 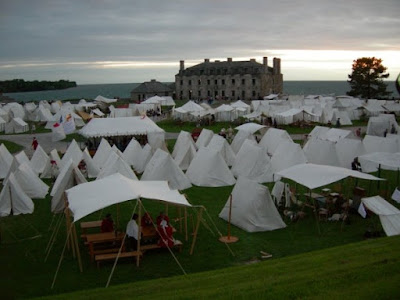 The interior of the fort, the 'Castle' looms at the rear.
The French surgeon wore a black hat and a long grey overcoat of some sort. I walked in among a flurry of activity and there on the table before me was every manner of medical instrument I could have dreamt of!

I bowed and introduced myself. I was certain he would know who I was, as I was still wearing my blood-stained pigskin apron.

I informed him that the day was ours and that his equipment was now the property of the Crown. He did not seem too surprised as I told him that I would send back some men with boxes to fetch his instruments for me. They would make excellent additions to the British Hospital. I offered to escort him personally to the boats, but he declined my offer. 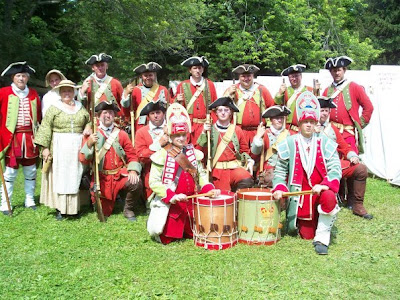 The men (and women) of the Independent Company that attended the siege. An excellent lot, one and all!

Ach du lieber Herrgott! I do hope your wound is healing and that Lucy was safe from any danger.