Sunday July 5- Lucy and I arose after a rather cold clear night. I was kept up a considerable portion of the night by the festivities in camp, waking several times to the sounds of the singing and merry-making.

We dressed in the cold and made ready for church, and learned after our chilly breakfast, that the church service was to be conducted in the cemetery. There were few places to sit, so I stood and listened. The service was very nice, but it made me miss our Parson John and his services.

Once I arrived at the hospital, I discovered that mr. Ronald Melton had brought along his younger brother Michael to aid as a surgeon's mate. We found another red armband to tie on young Melton's left arm.

There was no shaving to be had, as between Dr.Clift and myself, I believe we had shaved nearly every officer in the british camp. Instead I had a civilian fellow stop in for a bleeding on account that he was feeling 'melancholy'. I sat him in Ensign Bogg's chair and tied off a simple tourniquet on his right arm. He maintained his composure admirably, and seemed to feel much relieved afterward.

At 11 of the clock there was heard in camp a great volley of musket shots. I ordered the brothers Melton to bring the cart and we headed into the fray.


A French relief force had attacked a British roadblock in an effort to relieve the fort. By the time we arrived, the French were nearly knee deep, fallen in neat lines. One of the British commanders called me over to tend to a fallen French officer. His entire unit of men lay on the ground around him. He was seated against a tree with a great wound to the abdomen. 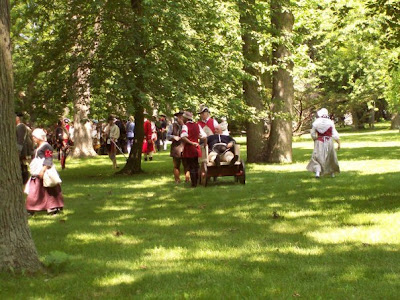 We placed the French officer on the wagon and took him back to the hospital with us.


He argued and yelled at us in French, but I was unaffected by it all, not understanding a word of it.

We removed his belt and sword and laid him out to operate. I removed the musket ball from his abdomen with ease. 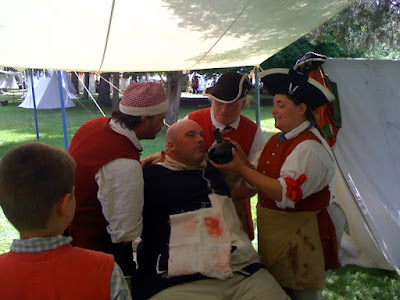 He was quite eager to get at our "L'eau de vie".

I have given you my Amadeus Award for Taste & Excellence. Please feel free to stop by to retrieve it!