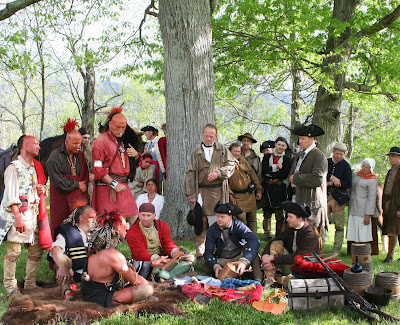 One morning in Virginia at the Raid at Martin's, I was out running errands for Captain France... when I chanced to espy a large group of well dressed reenactors, colonials, Indians and several horses. They were being lead by a white haired fellow with a large camera.

I stopped to watch them pass, they were such and interesting looking bunch... when I was approached by the photographer.

"Hi there, I'm David Wright," he introduced himself, "Wanna be in a picture?"

And that's how I ended up at the "Treaty of Sycamore Shoals" that took place in 1775. The photograph, which I've been told is being called "Witness the Parley", was made for promotional purposes for an event called 'Daniel Smith Colonial Days' that'll take place on September 27 and 28, 2008 at Historic Rock Castle located in Hendersonville.

David gave instructions to those of us in the back of the picture like, "Move closer together" and "look like you're interested in what's going on."

He even instructed us to play act with our hands, like we were discussing the goings on and to gesture... which is how I ended up pointing with my thumb as if to say, "Oy, would you look at this lot?"

I've learned a valuable lesson from seeing myself in this picture... I'm NEVER wearing that black scarf on my head like that again. I look like I'm trying to be 'gangsta' in the 18th century. I look absolutely absurd.

You can see more of David Wright's art and even purchase prints and such on his website:

The Fair at New Boston 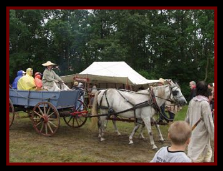 I was invited to the Fair at New Boston to act as a safety officer for Gerry and Maria and their group. If I understand my job correctly, I'll walk ahead of the horses and wagon and make sure that people stay clear and aren't trodden under hoof. Maria indicated to me on the phone that this has been a problem in the past 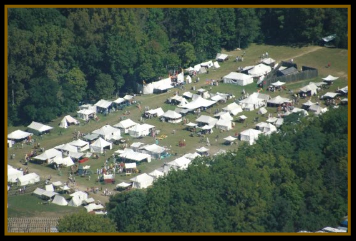 Gerry told me that there are several people there that he wants to take me around and introduce me to. I'm currently the most excited about meeting the 'Surgeon' that is scheduled to be there, I think I can learn a good deal from HIS presentation (if any).

I also think that this'll be a good chance for me to take a look at what other sites do in way of a fair... and to recharge my 'reenactor battery' as it were. With everything that's gone on at Manskers, I've been feeling a little less than enthusiastic about dressing out and doing anything.

Maybe it's the heat, maybe it's the fact that I feel like my interpretation of the 'Doctor' goes completely unappreciated and taken for granted. Maybe it's the mine field I've been walking thru in an effort to pull the Mansker Volunteers together into a single working group.

I really need to get my act together and take my show on the road. Lord knows I've got enough experience between doing costumed birthday parties, Magic, Harry Potter Summer Camps & Mad Science programs that I'd be able to put on one heckuva show for myself. I think all I'd need to do is gather my stuff together.

Blue Apothacary box w/bottles &c.
Doctor's certificate
clothing appropriate to the task
A boatload of period ref. books on the subject
No comments: 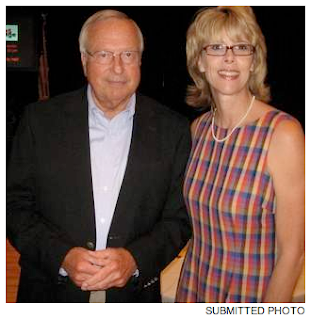 At the last meeting of the Mansker/Bowen volunteer group on Sunday July 20th... I got up to speak a little about what all had gone on after the saving of the site. This was the first time I'd really been in town to participate in any of the meetings, even though I had been working like mad to organize folks and rally the troops to attend and do things to save the sites.

We launched an aggressive e-mail and phone calling campaign that got the attention of the city commissioners and mayor. I went out to the Red River Meeting House for the first time to speak to the folks there about helping to save the sites before I left town to take Kieffer to national SkillsUSA competition in Kansas City, MO. I met with them that Saturday, then rushed home to pack so we could leave early Sunday morning.

I still made calls and sent e-mails while I was in Kansas City. We got free WiFi in the lobby... so Kieffer and I would take the competition computer down to the Lobby and set up camp. I sent emails and talked to people that were going to the big city meeting that Thursday night. Kieffer even snapped a few pictures in the lobby. We spent alot of time down there. To be continued...
No comments:

It is well known that the Doctor is the worst photographer in the 18th AND 21st Centuries... and I'm notoriously bad about getting photos developed. Perhaps I ought to get myself one of those new-fangled digital cameras? Photo developing is stupidly expensive!

These images are a few leftover from my trip to Martin's Station back in May...