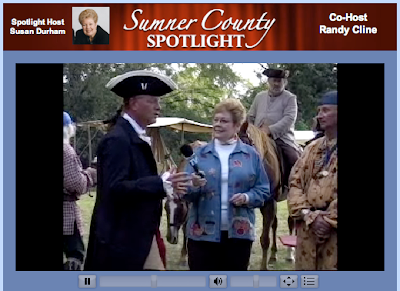 Footage from the Daniel Smith Days event I attended at Historic Rock Castle last month. Turned out to be a fairly well done report, lots of good footage of the treaty signing scenario.

You can watch the entire streaming video by visiting their site:

Upon the Ohio River 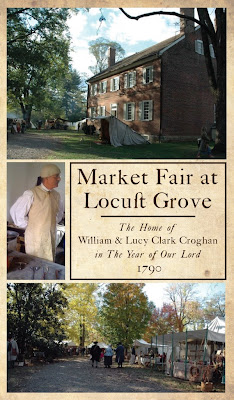 AFTER TWO DAYS demonstrating the Art & Mystery of my profession at Traveller's Rest, the home of the esteemed Mr. John Overton, I collected my payment from the house staff, collected my blankets and a few additional items and traveled Northward to the land upon the Ohio River. It was there that I had made arrangements to stay with Mr. Daniel Boone of Kentuckee whilst visiting the home of William and Lucy Clark Croghan, known to the locals as 'Locust Grove'. William Croghan is the brother-in-law and surveying partner of George Rogers Clark, founder of Louisville and Revolutionary War hero.

I ARRIVED WELL AFTER DARK, but could tell that there were a goodly number of fair participants already in residence on the grounds of the house. There were canvas tents aglow all over and I stumbled through the darkness looking for the large white marquee style tent that belongs to Mr. Boone. I searched the entire grounds to the best of my ability, but I was tired and I am afear'd that my eyesight tends to fail me in the darkness. After I was satisfied that I had investigated as much of the soggy grounds as I was able, I returned to the entry gate along the main road and spoke to two of the house staff to inquire as to the whereabouts of Mr. Boone. They told me that Mr. Boone had sent along his apologies and would not be in attendance this year.

AND SO IT WAS THAT I WAS LEFT TO FEND FOR MYSELF in the land upon the Ohio, it was to be a grand adventure! There had been a mighty rain that afternoon and the ground was muddy and cold, so I retreated to my blue wagon and resigned myself to sleeping in it for the night. I curled up in the back with my woolens and slept well, other than the occasional bout of wakefulness to stretch my cramped legs out.

SATURDAY ARRIVED and I readied myself for the day, and ate the breakfast prepared by the house staff. Afterward, I walked around merchant's circle and had my first look at the shops as they opened for business. I purchased a fine, hand-stitched lather wallet from the Smoke & Fire tent with some of the money I'd been paid while at Traveller's Rest.

IT WAS THEN that I decided to seek out the local physicians and introduce myself. There in a little stone building next to the house proper was where I found Doctor Miller and his family. His cross-stitched sign pinned above the door read "Surgeries & Bone Setting - L. Miller". The quarters they had been assigned were very modern and spacious, large warm hearth, white plaster walls, solid brick floor & nice furnishings. Dr. Miller and Mrs. Miller stayed downstairs, and their daughter and son-in-law stayed in the upstairs.

I FELL IN with the Millers like they'd always known me, and after the family had gotten up and left for the day, 'Doc' Miller offered me a bit of 'mouthwash' from his surgeon's box. We made arrangements to work together out of his quarters, so I fetched my apron and certificate of proficiency from the wagon and was set for business. I learned a good deal about the craft from the good doctor. I also met the esteemed Doctor Hill, whom I had heard about through Parson John of Red River.

WE DEMONSTRATED our craft to passersby throughout the day, and I stepped outside several times to watch the jugglers that had set up their show in the yard in front of Miller's quarters. At one point I spotted a fellow nick some of the jugglers equipment, and I shouted at him, but he paid me no heed. I notified two of the blue coated soldiers that had stopped in to share in our morning dose of mouthwash, and the chase was on! While the thief seemed to have only one arm and a bit of a limp, he put up a most entertaining display of attempting to escape.

THE REMAINDER of my day was spent in demonstrating my profession, and diverting myself in the shops that were set up there on the grounds. That evening, I was invited to dine with the Millers, and we had a marvelous meal that had been prepared in the kitchen right next door. The good doctor charged my mug with a fine dark beer that he had brought with him.

AT THREE OF THE CLOCK there was held, in the small valley near the house, the largest play-acting battle I have ever borne witness to. There were at least seven Units represented, Blue-Coated Continentals, Militia, Hessians, British Redcoats, Scottish, Green-clad Butler's Rangers, and a large contingent of Indians. The battle included lots of marching and maneuvers, and two large cannons. The battle ended with the defeat of the Continentals as the King's forces overtook their camp, sending the women and other running to safety.

I BID THE SURGEON and his family good night and made my way to the tented tavern known as "His Lordship’s Beef", Caterers of Fine Victuals who  served hand crafted wines, cider and ale. I spent the rest of my evening with the tapster talking about his winery, sampling his wine and discussing the finer points of Physick around the fire out back. His business was slow after a very busy day, as most of those in attendance had retreated to their own camps to sing and drink their own brews.

I EVENTUALLY RETREATED to my wagon and stretched out to sleep. It was fearsome cold that night and I spent a good deal of it shivering. When I awoke at dawn, I was too cold to attend the Sunday service, deciding it was time to return home, and pointed my blue wagon once more southward to the lands below the Ohio.
2 comments:

I visited Locust Grove this weekend... and I met someone who recognized me strictly because he'd been reading this journal! He called me out by name as I was passing Doc Muzzy's tent... I'd never seen the guy before. What an interesting feeling to be known by a stranger! Woo-hoo, internet.

So I've decided that I needed to freshen my journal up a bit, and to that end I have fashioned a new header graphic and will be altering the format a little bit to make it more enjoyable to write... and hopefully more enjoyable to read.

Some of the most fun I've had in the past while writing this has been when I visited Martin's Station and wrote about my experiences 'in character'. Therefore, I think I'll start doing more of that sort of thing. I'll post all my 'in character' writings in regular text like this...

I should have a report up of my four day marathon as the Doctor up in the new format soon.

Thanks for reading out there in internet-land you strange and wonderful people!

You can let me know that you're paying attention in one of two ways... comment on a post you find interesting by clicking on the spot that says "0 Comments" at the foot of every post... or become a 'follower' of my journal by clicking on the "Follow this Blog" button just above my profile picture on the left of the page.
No comments:

I took part in the Tennessee History event this weekend. Where else in the city could you listen to a speech given by Abe Lincoln, watch a battle from WWII, and be invited to dine with a group of southern belles from the Civil War era?

Other folks in attendance were Sam Davis, General Andrew Jackson, Sgt. Alvin C. York, a group of Black Federalist Troops from the Civil War, Spanish Conquistadors in their armor, a bevy of WWII troops and vehicles... it was lots of fun.

I ate lunch with President Lincoln on Friday after he gave one of his speeches and we talked alot about my Doctor interpretation, he offered up lots of really good advice for me taking my show out and about. What a great guy. He's been doing Lincoln full time for nine years now... I was impressed.

I must've had my picture taken 50 times on Saturday, and I gave out about as many of my business cards. Which reminds me, time to reorder... I'm all out.

I should have some pictures from the event soon!

History Festival Pix from 2007
No comments:

Got a message from a fellow by the name of Michael Gustafson, who took a ton of good looking photos from Daniel Smith Days. He sent me a link to the pictures he took. Good stuff, thanks Michael!

I was sent a link to even more pictures from the Rock Castle event! Thanks to Bill and Deborah Glidden for taking the pictures & forwarding the link!
No comments: 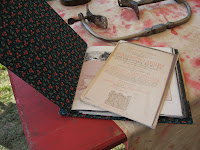 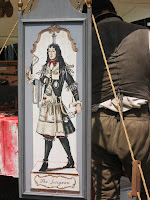 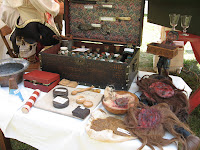 The additional images from New Boston of John Murphy's set up. Good stuff, I especially loved his sign with the drawing of the surgeon on it with all his tools.
No comments:

Robert Operia's great tool chest with medicinals in the top.
No comments: