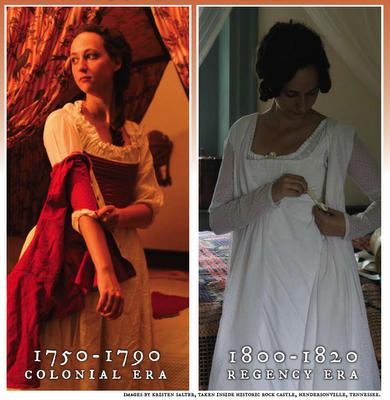 WHATEVER SHALL I WEAR? 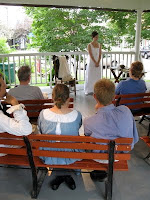 Age old questions about the 'why' and even 'how' certain garments were worn are answered in this educational and entertaining presentation, suitable for all audiences.

Miss Waterman offers a 45 minute presentation followed by a 15 minute Q & A session. 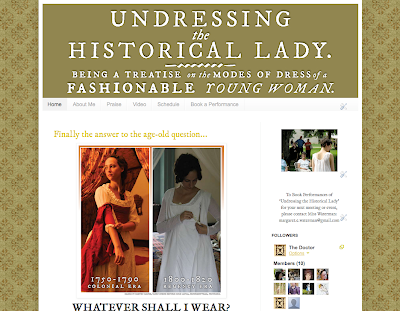 Find out more about her presentations
on her website by CLICKING HERE.
To Book Performances of
‘Undressing the Historical Lady’
for your next meeting or event,
please contact Miss Waterman:
margaret.e.waterman@gmail.com

Greetings again gentle reader. If you have a keen eye, you may have noticed that I have made a few alterations to the journal before you in recent days. Never fear, it is only my attempt to remove clutter and make it function in a more efficient manner. I have made some additions to the SCHEDULE page and made some graphic modifications to the PRAISE page with the hope of making more changes to it in the near future.

My trip to Fort Nashborough was hot, but fruitful, in that it allowed me to serve the grand old site, as well as make a few business connections and visit with friends.

I have discover'd the hiding place of my copy of DOMESTIC MEDICINE! Having sent Lucy, my eldest, out to clean out our blue wagon, she returned with it in her arms.

Says she with a smile, "T'was pushed under the front seat Father."

Upon the week's end of August the 13th I shall travel once again unto Fort Loudoun upon the Tenasee River. Upon further review of my schedule, I have discover'd that Loudoun will be the beginning of a TEN WEEK travel marathon!

Week One
Fort Loudoun Garrison Weekend August 13-14 Vonore, TN.
Wherein I shall be in charge of His Majesty's Infirmary whilst Dr. Anderson is away on the King's Business.

Week Two
Battle of Blue Licks August 20-21 Mt Olivet, KY.
Wherein I shall be giving two medical lectures for the benefit of the publick and the Governess will be giving a discussion on women's fashion.

Week Five
Painted Stone Settlers Long Run Massacre September 9-11 Shelbyville, KY.
Wherein I shall be giving medical lectures for the publick and the Governess will be giving a discussion on women's fashion.

Week Six
100 Years at the Falls Farnsley-Moremon Landing, September 16-18 Louisville, KY.
Where I shall again discuss discuss the Art & Mystery of my craft.

Week Seven
Muster on the Wabash September 24-25 Vincennes, IN.
Where the SECOND DOCTOR will discuss medicine and Surgery and Miss Waterman will be discussing fashion.