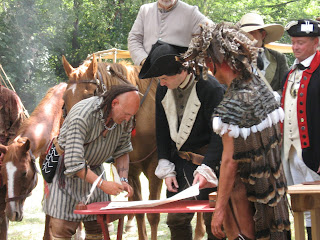 Above: "Bloody Fellow" (portrayed by B.L Rhodes) makes his mark next to his name on the Treaty between the United States and the Cherokee Nation. "General James Robertson" (Tippy Curtis) is in the navy and red coat on the far right.

I finished the Treaty with time to spare and delivered it on Saturday to the event. After a brief discussion with Ken Hoppes who was in charge of the weekend event, I ended up actually participating in the treaty signing (again) acting as the 'aide to General James Robertson. I mostly gestured and held the document while the key players 'signed' it. At least I was dressed properly this time.

The Treaty of Holston was signed by William Blount, governor in and over the territory of the United States south of the Ohio River, and superintendent of Indian affairs for the southern district for the United States and representatives of the Cherokee Nation on July 2, 1791 near the Holston River and proclaimed on February 7, 1792.

This treaty mentions the following:

Establishment of perpetual peace and friendship between the two nations.

Prisoners of war to be restored.

Boundaries established between the Cherokee Nation and the United States.

Stipulation of a road by the United States.

No U.S. citizens may settle within the Cherokee Nation.

No U.S. citizens may hunt within the Cherokee Nation.

Cherokees must deliver up criminals to the United States.

U.S. citizens committing crimes within the Cherokee Nation are to be punished.

Retaliation restrained by both nations.

Cherokees to give notice of pending attacks by other tribes against the United States.

Both nations to cease any animosities held against each other. 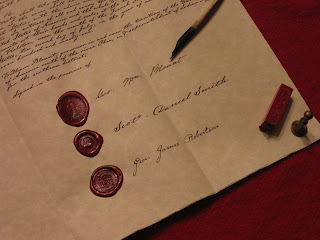 The signatures on the finished document. I even did it up right with the wax seals beside the names.

Daniel Smith Days was a great event, I had so much fun... and the Parley scenario went off well with the public. There was a good vibe with the people there, the vendors, artisans and such... it was nice to get to experience that. Saw LOTS of familiar faces from Manskers, past & present volunteers. It was interesting to make note of how many people were at Rock Castle that had been driven away from Manskers for one reason or another. I made it a point to talk to as many of them as I could and found that most of them told the same story.

I can't help but wonder how things went at Mansker's on Saturday while I was at Rock Castle... but I obviously didn't wonder enough to show up there for 'free museum day'.

At Rock Castle, my interpretation and participation was valued and appreciated.
1 comment: 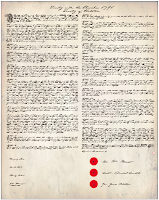 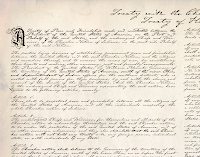 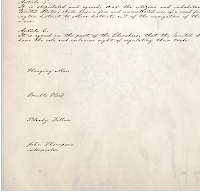 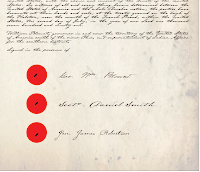 The folks from Rock Castle called and asked if I'd be able to produce the 'Treaty with the Cherokee' from 1791 for a recreation of the signing that is to take place this weekend at "Daniel Smith Days".

The pictures posted above are the unfinished comp versions with a simulated background to replicate what it'll look like printed on the parchment paper. The finished product will be 19" x 24". The red circles are there to simulate where I'll place the three wax seals for the gents who signed it and will NOT be there in the finished document.

Unfortunately, the original version of the document seems to be nowhere to be found... at least not in time to reproduce it for the event. So I did what I do best... I faked it.
No comments:

The Doctor's promotional materials are nearly completed! It seems like I've been working on them forever, but with some help from Liz in the copy writing department and a massive dose of inspiration from some outside sources, I lit a fire under the project and it's almost finished.

It's undergone several transformations, and incarnations... it started out as 2 pages, then eventually went up to 6... then getting whittled back down to a much more reasonable 3 pages.

If you've been paying attention to the blog... but honestly, who am I fooling really... I posted the original first page of the Doctor's promo stuff on here a while back. I was so proud of it, I just couldn't keep it hidden on my desktop for long.
1 comment: 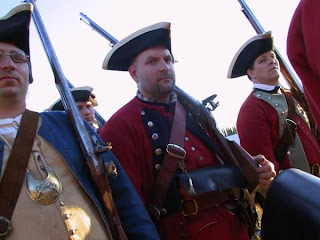 Lucy, Molly and I went out to the fair at Fort Loudoun in Vonroe, TN on Saturday. We took Janice and Rachel with us and split the gas...

What an amazing site! The fort is fantastic, and the volunteers and staff were extremely friendly.

The year for the fair I believe was roughly 1761, right toward the last few years of the French and Indian war... in which Fort Loudoun played a role. This is a proud moment in the life of THIS time-traveler, it was the farthest back I've ever gone and participated! There was a battle between a assemblage of French and British soldiers, and a bevy of natives and irregulars. The British troops, in their rusty orange uniforms, drove off the dark blue clad Frenchmen, and routed the irregulars. 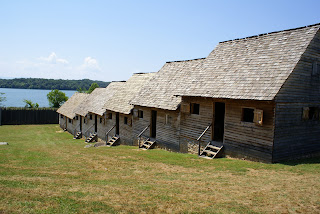 Some of the buildings in the fort... barracks on the end of the row, with the infimary at the top closest to the viewer.

I met with a young woman who acted in the stead of the regular fort Physician. She was very knowledgable and gave a great demonstration. After viewing their medical set up here, I now know EXACTLY what I want my own set up to look like!

Three beds for the sick and injured... by jove it was the closest thing I've seen to a full blown colonial era hospital... very exciting! 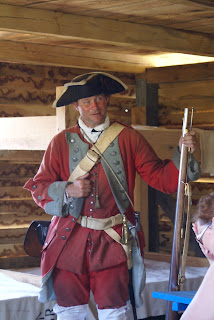 Lucy, Molly and Rachel swam in their shifts in the lake after the public had gone. A great number of the other participants went for a swim as well.

Afterward, about half past five or so, the soldiers (and others) were lined up and given their rum ration. Powerful stuff... it ate the varnish off of Steve Caudill's tea cup. I turned it down, not only because I had to drive home, but the smell was such as to put a tear in your eye.

After two rounds of rum rations for the men, the singing and dancing began. I've never seen so many flushed cheeks.

Unfortunately, the girls and I had to pack up and head home... the three hour drive was a bear. But the girls played and sang in the back seat the entire way. 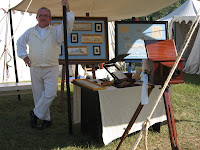 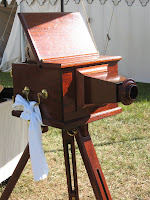 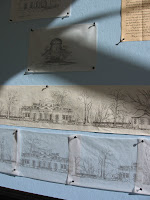 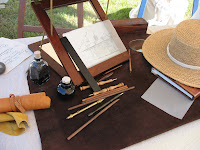 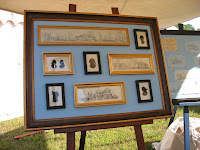 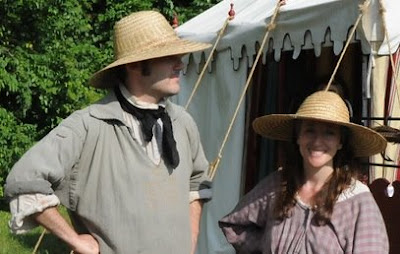 Just returned from the fair at New Boston, which took place in George Rogers Clark Park in Ohio. Lizzie and I worked for Maria giving wagon rides to the public during the fair. Liz took up the money, and I worked as a 'safety guy', walking ahead of the wagon and keeping people from being stomped by the horses, or crushed by a wagon wheel. 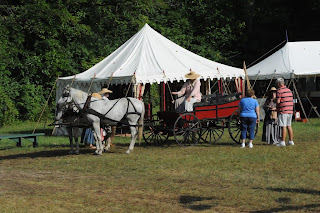 I believe this might have been the very first wagon ride we gave on Saturday morning. Maria is in the driver's seat, Liz is at the back handling the money. 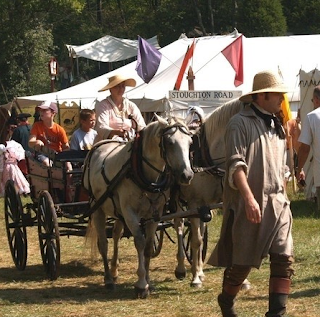 I wore a straw hat and wagoneer's smock supplied to me by Gerry. It was hotter than Hades in that heavy garment, as was to be expected. I shouted "Wagon coming through, make way for the wagon!" and "Mind your toes!"

It was facinating to make note of how oblivious the people on the roads often were to the approach of the horses. Maria said that the visitors were on a sort of 18th century 'sensory overload'. She was right though, there were LOTS of sights, smells and sounds to take in... it was a pretty fantastic affair. 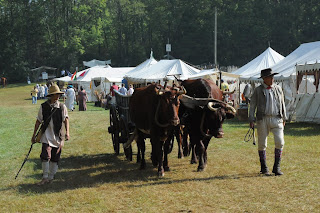 Here's a picture of oxen and the freight wagon... the young man on the left is the wagoneer's apprentice, Jacob... the other fellow on the right is Gerry Barker. The oxen are named after Gerry's four least favorite kings, William, Charles, George and James. I can't tell them apart, but Liz swears that she can now.

After our shift was over on Saturday, Liz and I helped Gerry, Jacob and 'the boys' to haul a great load of straw and hay around the fair to deliver to various merchant's & artisan's camps. We even took a load over to the Indian camp. It was the best looking Indian village I've ever seen at ANY historic encampment. Liz and Jacob rode up on top of the loaded wagon... which rose about 12 feet out of the bed of the wagon itself, while I walked behind. It was great fun! 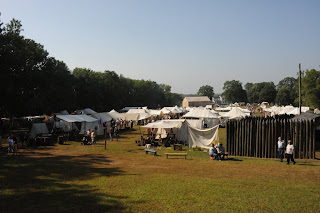 The wagoneer's camp was located at the back of the fair, in a shaded area. It was on a slight rise that overlooked the entire fair. The above picture was the view from our camp. The camp consisted of myself, Liz, Gerry, Maria, Janice, Jacob, Rachel, Melanie & her friend Melisa.

Other things we did after our shift ended on Saturday: 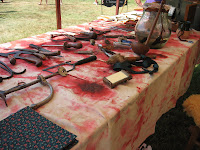 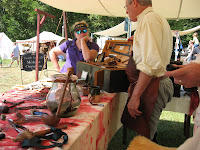 Gerry introduced me to the two Surgeons in attendance. They were great guys, very knowledgeable with a fantastic (if somewhat gruesome) setup. Lots of interesting medical tools I had never seen before, some really specialized stuff. I am more determined than ever that I MUST get my 'traveling physician' interpretation up and going.

Walked around the fair visiting the merchants. I collected a goodly sum of business cards. Perhaps these might come in handy if we ever get a fair event like this restarted at Manskers? 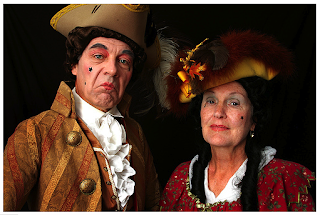 We helped to load in the dinner that was supplied to the participants on Sat. evening with the ox drawn wagon. One more excuse to take a ride. We hauled the giant food containers on and off the wagon.

Liz and I went exploring around the park and discovered the trail that lead to a beautiful little waterfall and creek. What a great park! I only wish I had worn my boots... by this point in the day my feet were practically raw from walking on rocks and gravel. Note to self: MUST get inserts for boots!

Free dinner and unlimited FREE beer for the participants that night... I drank my one very large mug of beer and it made me instantly sleepy. Although I'm sure the immense amount of sun and exercise I'd gotten that day didn't hurt things either. 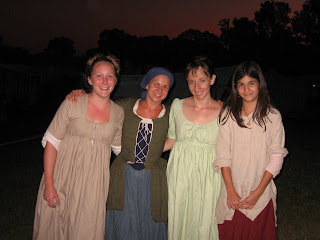 Just before the dance

A great dance was held afterward in which we learned several of the most fashionable (for the year 1800) dances. There was a good-sized band and a large crowd present for the event. The girls in camp all changed into the best clothes they had available and got their hair done (thanks to Melanie) and generally acted silly.

Maria stepped in a hole and twisted her ankle whilst dancing with a fellow from the indian camp. I spent a portion of my time guarding the beer... when I wasn't dancing of course.

Liz and I resolved never to eat carbs again... we didn't eat a single green thing all weekend! Not that we didn't want to you see... just that they were few and far between.

More pictures for the fair can be found at the following: