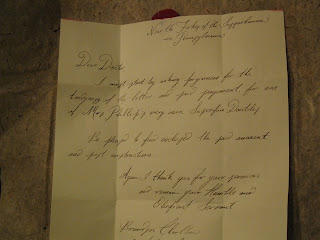 The letter from mr. Charlton 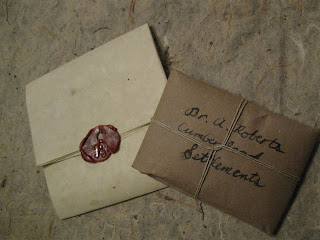 The letter and packet from the Widow Black 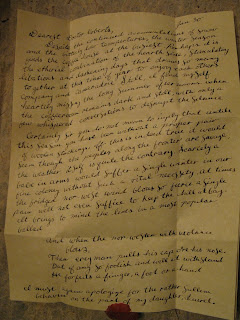 The Widow's letter, page one... 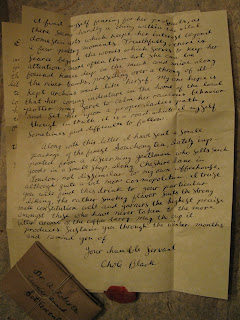 was glancing up the hollow a few days past and realized the skeletal limbs of the trees were cloaked in a hazy fog of green. Flowers have also begun to spring forth from the ground, heralding the coming of a warmer season.

The tree in front of my home has also begun to sprout its evidence of the season. Bright green shoots are beginning to issue forth.

I have been preparing for my journey to travel up to Prickett's Fort upon ye request of mr. Wm. Schneider. Pricketts Fort, as I understand it, can be found where Pricketts Creek joins the Monongahela River in the foothills of the Allegheny Mountains. According to the initial letter from mr. Schneider, Prickett's would seem to suffer from continued violence along the border with the Shawnee. 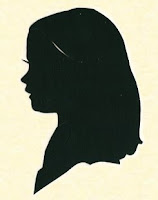 My Molly will be traveling with me to the fort upon this occasion. She is very excited that she will have me all to herself. She is also quite excited to learn hat there is a 'fort cat' at Prickett's.

I have also been giv'n the schedule for the week's end, it is as follows: 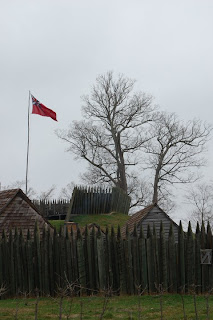 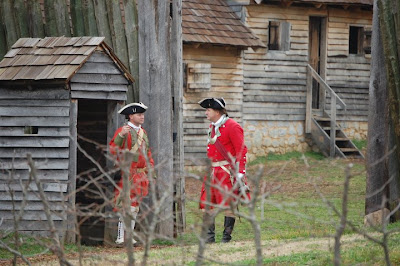 Ensign Boggs talks with one of the soldiers at the guard house.
Friday night we sang songs in the barracks near the two great fireplaces. They were positively blazing! One could scarcely stand near them without the danger of losing one's eyebrows. I had two mild ales and slept like a prince in my bunk, not rousing until the next morning, when I could hear Pvt. Ellis stomping about in his boots as he readied for the day. Ah, the eagerness of youth! Several of us made comments about the need to make Ellis a pair of moccasins to wear in the mornings. After observing his footfalls from the warmth of my bunk, I finally decided that moccasins would not be the answer. Ellis walks, placing his heels down first, even barefoot, he would sound as though he was stomping about.

Pvt. E. Ellis (J. Gamble)
Saturday I unlock'd the infirmary first thing in the morning. It was cold, so I robbed coals from the barracks to build a fire in the infirmary hearth. After the fire was lit, I put my apron on and swept the floor vigorously. As I worked, it began to rain, weather that would last through the majority of the day. Sometimes a soft mist, occasionally a driving sort of affair, it made for muddy conditions that kept the ground in front of the more heavily visited buildings soggy and difficult to enter.

A small group gather'd just outside the door of the infirmary there at the top of the hill, and seemed to be looking off into the distance and discussing something in an animated fashion, so I stepped out to have a look. Pvt. Kirby pointed out a rather good sized bald eagle perch'd in a nearby tree. I ran back and fetched my new looking glass to get a closer look. The new glass worked very well, I could see his head as he looked about, completely undisturbed by our presence. 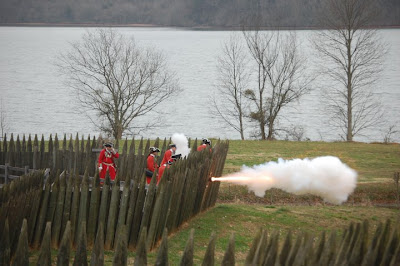 The day for the men of Fort Loudoun was occupied by exercising the artillery pieces on the lower bastions, marching and musketry drills.

About mid day, Parson John and a group of six pupils arrived at the infirmary for a visit. I discussed surgery and medicine with them for a bit, when I noticed Maggie standing outside on the step, the rain from the rooftop dripping down upon her. I turned to the Parson, "Parson, Maggie may come in out of the rain if you wish... as long as she doesn't touch anything." says I.

"Maggie! Come in out of the rain!" cried he out the door. 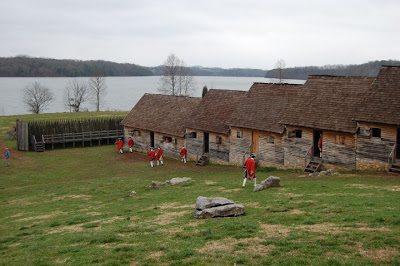 The fort, alive with activity. 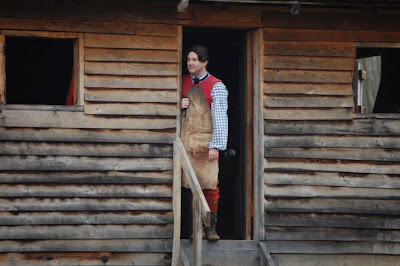 After opening for business.
Sunday morning, the infirmary was alive with activity after the brief service by Ensign Boggs. Miss B------ asked me if she could make use of the fine fire I had once again started in the infirmary to brew her coffee and heat water. Coffee and hot chocolate were served soon thereafter, the soldiers and officers came up the hill with mugs in hand to get their dose of hot coffee. A better antidote against the falling weather I cannot imagine. 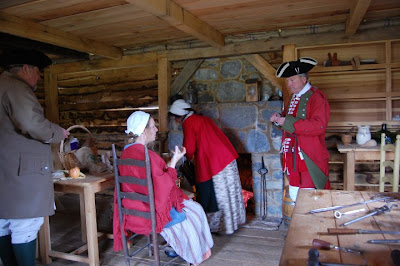 Sgt. Nutcher came in and partook of the coffee, and paid me a high compliment. He told me that he thought my voice was fine and clear... in reference to my singing the night before. I think this high praise indeed, considering I believe the goode sergeant to have the finest voice of all the men station'd at Loudoun.

Later, as I dusted the bottles of medicinals upon the shelves, I discover'd one that was broken. Given the clean lines of the break, I would suspect that it burst after one of the hard freezes we have received this winter past. 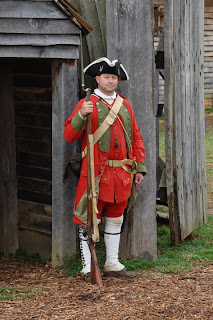 HIS WEEK'S end I report for duty at Fort Loudoun for the first time during this present year. It is my understanding from my recent correspondence from Ensign Boggs, that Dr. Anderson will be away on the King's business, and the health of the men will be my sole responsibility.

One can only imagine the wretched state the poor infirmary will be in after being shut up for such a prolonged period. There shall be no end of sweeping and airing out of the place, not to mention dusting the great glass bottles that line every shelf. Such is the mate's lot I s'pose.

Having pockets to let, I have agreed to carry along a passenger when I travel, in an attempt to defer some of the expense of the trip. That passenger will be mr. E. Mason who lives to the West. He is an agreeable fellow whom I have met before, but have not seen in quite some time. 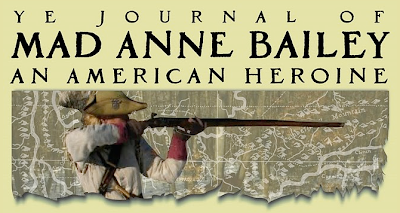 I have recently come to the aid of one of my country women in the form of creating a journal such as my own for her to make use of. Anne Bailey, whom I have met on several occasions, was desirous to have a journal of her own.

Mad with grief following her first husband's death in the Battle of Point Pleasant, Anne became infamous for handling a horse, a hatchet and a long rifle as well as any man on the frontier. Known as 'The White Squaw of the Kanawha Valley' to some, and 'Mad Anne' to others.

I created all the custom graphics for the "Mad Anne" blog according to the green template that blogger offers, in a very similar manner as my own. If you are interested in having me help you create a blog of your own for a small (and very reasonable) fee, contact me today!

From ye Frontier of Kentuckee (UPDATED!)

This brief note from mr. Barker concerning his oxen. 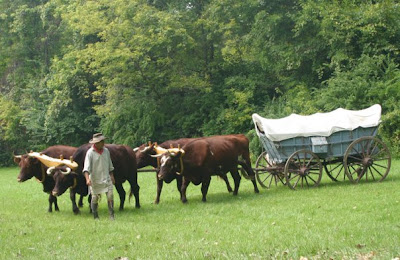 The new ox is beautiful... He has no name recognition so we decided to rename him 'William Too'.

It is hard to tell yet if the others are accepting him. I drove everybody this afternoon. I'm going to try to have them out a long time tomorrow. I need to thank everyone that helped. 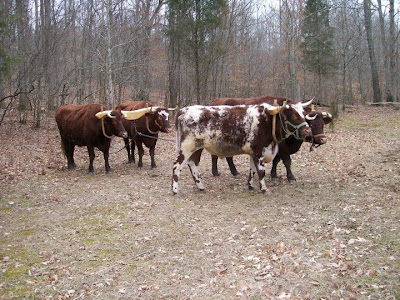 Another note from mr. Barker concerning his oxen.
Here is William Too (the one with the most white on him) in the off side leader slot hooked to a small log. He is intelligent, fast and not sure what these crazy people are doing to him. I think he is a good natured animal though, just not used to handling or work.

We did a second training session this afternoon and hauled some light logs. I don't think William has ever gone two miles before. He does not understand "steady" movement. George is trying to work it all out, but it is confusing for him. Maybe a little easier on Charles and James because they still have each other. You can see confusion on William's face.