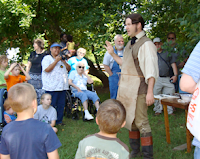 Mr. Roberts... was an invaluable addition to our program, and brought 18th century medicine to life through his first person interpretation. Mixed crowds of young and old were captivated by his performances. We were genuinely impressed by Mr. Roberts and his traveling physician character and hope to feature him in future events at the site. 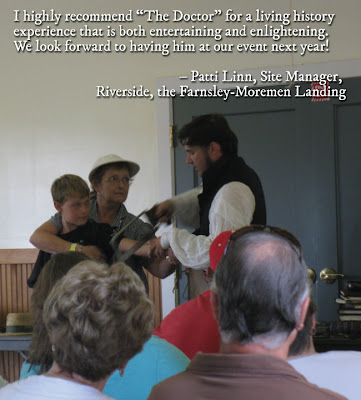 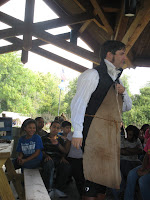 2010 was the first time The Doctor participated in the Falls Landing Foundation's timeline event, 100 Years on the Ohio (1765-1865) at Riverside, the Farnsley-Moremen Landing, and he immediately became one of the most popular and versatile aspects of the event. He started the weekend by joining us very early on Friday morning to give a group of 500 school children a taste of the past and educated them on period medicine in a very hands on, enjoyable, and engaging fashion. It was on to more adult audiences for the rest of the weekend and they were no less enthralled. It was the best attended of our series of presentations and the interest of the spectators made it the longest lasting as well. Doctor Roberts brought a crucial aspect of life in early Louisville to the event that before was missing and has established himself as a crucial part of our identity,

"A WONDERFUL addition to any program! You will not be disappointed!

...The Doctor has attended two events this year that I organized and I can say without reservation that his work is impeccable! He is very engaging and draws a great crowd. He not only flawlessly stays in character, but he also peppers his monologue with dry humor that perfectly matches his clipped accent making a performance so believable that the Doctor becomes real. Furthermore, his knowledge of history and of the early medical field are commendable and well-researched. I am looking forward to bringing him back next year!" 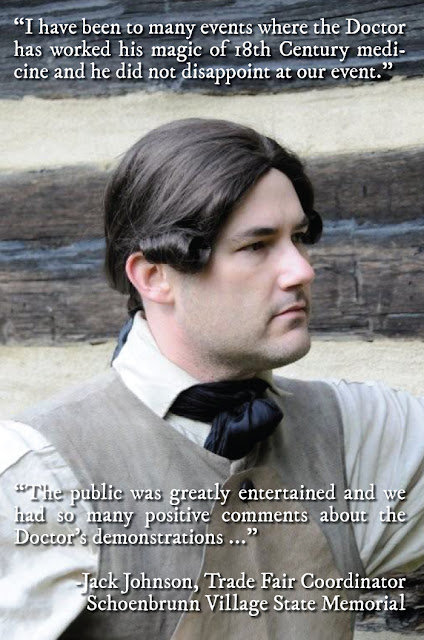 "[the Doctor] did a wonderful job relating to the children and looked magnificent in costume. I just wanted to stay for the entire session."

“Mr. Roberts' character was so realistic... it was nearly impossible to tell where the Doctor ended and Mr. Roberts began. His dedication and enthusiasm for living history was very evident. His presentation was a marvelous combination of education and entertainment.”

“By interpreting an era of medicine innocent of many modern niceties, Albert Roberts opens a new perspective of today's world with a delightful blend of history and science for learners of all ages.”

“Mr. Roberts brings an air of excitement to the recreation of 18th-century medicine. His interaction with the public engages their interest whether they are school children or retirees. Professional, accurate, and entertaining.”

“The first time I saw the Doctor, he was entertaining some children and their parents. I was supposed to be demonstrating book-binding myself, but I was so spellbound that I spent an hour or so sitting in his cabin just watching him work. What a wonderful job he does...”

"The Doctor strolled onto our campus and never once broke character. He brought the 18th Century to Currey Ingram in his own great style. His performance delighted adults and students alike and kept them on he edge of their seats. They enjoyed the wax sealing exercise and held onto those papers like a treasure. The Doctor was a perfect addition to our program and we look forward to revisiting 18th Century America with him in the near future."

"You are amazing! Thank you for all that you do to keep history alive!"

"Thank you for what you are doing, it's appreciated by us all at Sea Rats Atlantic."

Have the Doctor speak to your group, organization or community!
To book an appearance contact:
Albert Roberts
ahroberts4@yahoo.com