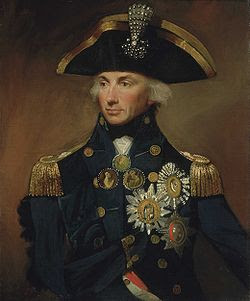 Almighty God has blessed his Majesty's Arms in the late Battle, by a great Victory over the Fleet of the Enemy, who I attacked at sunset on the 1st of August, off the Mouth of the Nile. The Enemy were moored in a strong Line of Battle for defending the entrance of the Bay, (of Shoals,) flanked by numerous Gun-boats, four Frigates, and a Battery of Guns and Mortars on an Island in their Van; but nothing could withstand the Squadron your Lordship did me the honour to place under my command. Their high state of discipline is well known to you, and with the judgment of the Captains, together with their valour, and that of the Officers and Men of every description, it was absolutely irresistible. Could anything from my pen add to the character of the Captains, I would write it with pleasure, but that is impossible.

I have to regret the loss of Captain Westcott of the Majestic, who was killed early in the Action; but the Ship was continued to be so well fought by her First Lieutenant, Mr. Cuthbert, that I have given him an order to command her till your Lordship's pleasure is known.

The Ships of the Enemy, all but their two rear Ships, are nearly dismasted: and those two, with two Frigates, I am sorry to say, made their escape; nor was it, I assure you, in my power to prevent them. Captain Hood most handsomely endeavoured to do it, but I had no Ship in a condition to support the Zealous, and I was obliged to call her in.

The support and assistance I have received from Captain Berry cannot be sufficiently expressed. I was wounded in the head, and obliged to be carried off the deck; but the service suffered no loss by that event: Captain Berry was fully equal to the important service then going on, and to him I must beg leave to refer you for every information relative to this Victory. He will present you with the Flag of the Second in Command, that of the Commander-in-Chief being burnt in L'Orient.

Herewith I transmit you Lists of the Killed and Wounded, and the Lines of Battle of ourselves and the French. I have the honour to be, my Lord, your Lordship's most obedient Servant,

A RETURN OF THE KILLED AND WOUNDED IN HIS MAJESTY'S SHIPS, UNDER THE COMMAND OF SIR HORATIO NELSON, K.B., REAR-ADMIRAL OF THE BLUE, ETC. IN ACTION WITH THE FRENCH, AT ANCHOR, ON THE 1ST OF AUGUST, 1798, OFF THE MOUTH OF THE NILE. 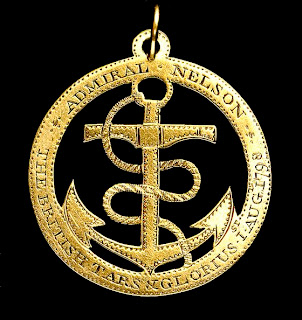 The medal commemorating the Battle of the Nile. Front 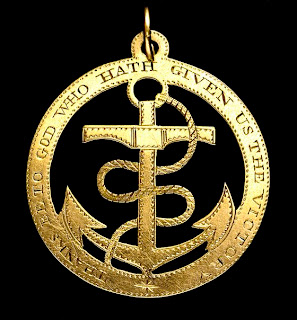 Reverse.
Badge commemorating the Battle of the Nile, 1798, in the shape of a foul anchor within a circle. An inscription is engraved on the latter – above: ‘ADMIRAL NELSON’, below: ‘THE BRITISH TARS & GLORIUS . 1ST . AUGUST . 1798’. [sic]. Reverse: Inscription engraved on the circle: ‘THANKS BE TO GOD WHO HATH GIVEN US THE VICTORY’.
These anchors were originally worn on the coat in the centre of a patriotic ‘favour’, or ribbon rosette. Emma Hamilton wrote to Nelson on 8 September 1798, ‘My dress from head to foot is alla Nelson. Even my shawl is in Blue with gold anchors all over. My ear-rings are Nelson’s anchors: in short, we are all be-Nelsoned.’

Labels: Battle of the Nile, Nelson 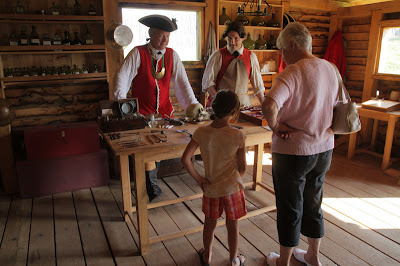 Dr. Anderson and I in the Loudoun Infirmary. 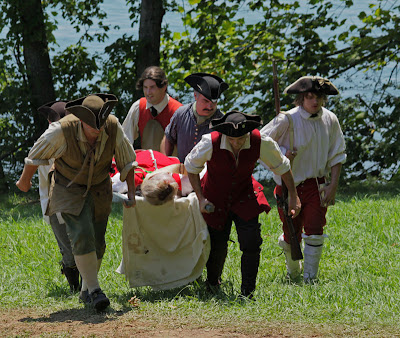 Rushing Anderson back up the hill after he was ambushed by the Cherokee.
This is an excellent image because you can really see the 'scalp wig' that Sam Reed worked so hard on. This is the only image I've found that you can see the 'scalping'. 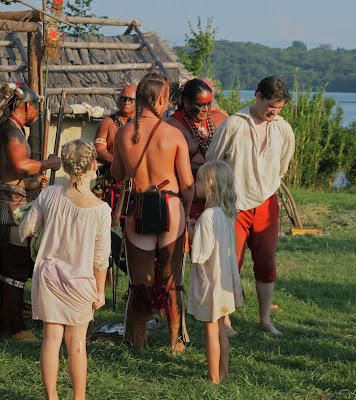 The white captives of the Cherokee. That's my Rose and Sophie
there in the foreground in their shifts.
all images in this post by R. Young.

On August 9th 1760, we marched out of the Fort of the final time with only what we could carry with us. We were a long and sorry procession as we marched off toward Fort Prince George in South Carolina. As the sun went down, we set camp along Cane Creek, just up river from Loudoun.

In the night, a band of Cherokee attacked with no warning, killing about twenty five of our soldiers.

Several of our number were captured, myself included. We were beaten severely about the face and arms. I was bound about the neck with a leash that ran down my back and to my hands. Private Ebenezer Sweet was bound in a similar fashion and placed in a prisoner procession just in front of me. 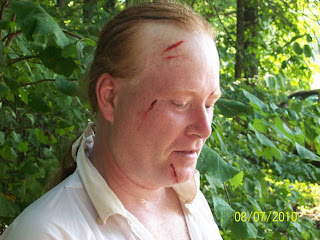 Mr. R. Melton, whom you may recall served with me in the Hospital at Fort Niagara. 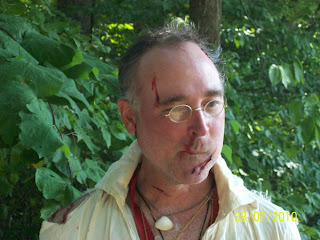 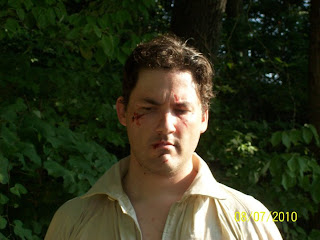 My own wounds.
We were paraded back along the trail and trough old Fort Loudoun, which was now nearly unrecognisable as our former home, and back out again to Tuskeegee, the nearby Cherokee village. 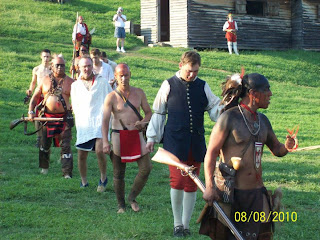 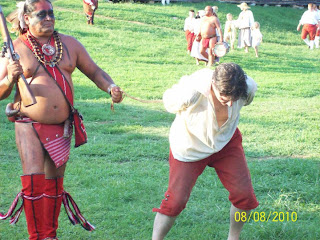 Once there, we were in the thick of them. I understood very little of what most of them had to say, they shouted and gestured a great deal, especially the fellow who held my leash. He seemed generally unhappy, pushing and kicking me when I didn't march along to suit him.

Eventually it was made clear by one of the surprisingly well spoken elder women, that the captured men were to be made to run the 'gauntlet', a particularly vicious tradition whereby we would walk or run down the middle of a group of the Cherokee and be beaten with long, thick cane rods. We were untied and Private Sweet was made to go first. He marched through the line defiantly, arms at his sides, he seemed half mad with the injuries inflicted and starvation. 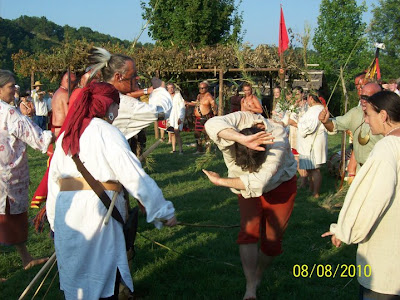 I was pushed in next, I attempted to resist, but my captor would have none of it and gave me a great blow to the back of the knee and then to the stomach to goad me onward. I landed on the ground and the beating began straight away.

Eventually I got up and shielded my face and head with my arms and got through the line as quickly as possible. Sweet and I watched as the others were made to go through. One poor Provincial fellow was beaten so that he had to crawl through and barely made it out. He laid at our feet afterward and was encouraged to stay down.

They seemed impressed that Sweet could march through seemingly unaffected by the blows and made him march through twice more. Each time, he kept his arms to his sides and marched through defiantly.

One of the natives on the other side of the group cried, "Make the Doctor run the gauntlet again!"

The well spoken Cherokee elder woman looked at Private Sweet, who stood bloodied next to me and said, "I do not think he could take another." as she mistakenly reached out for him.

She reached for my arm instead and pushed me on into the gauntlet again. 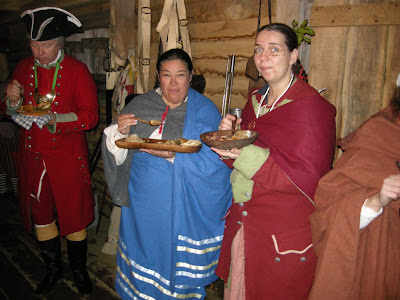 God bless that sprig of mistletoe that saved my life!


I was later treated to some of the first food I had eaten in some time. Eaglewoman brought me fresh water, fruit and a fat strip of cooked turkey.
Later that evening, the natives went back into the Fort and performed their dances.
"...ten or tweleve of which were entirely naked, except a piece of cloth about the middle, and painted all over in a hideous manner, six of them with eagles tails in their hands, which they shook and flourished as they advanced, danced in a very uncommon figure, singing in concert with some drums of their own make, and those of the late unfortunate Capt. Demere..."
From the Memoirs of Lt. Henry Timberlake
Being left mostly unattended, I took my opportunity to escape, slipping into the water in my linen shirt and red wool breeches. I crawled along the shoreline completely underwater, only my eyes and nose above the water. The natives that were still in the village and encamped along the water didn't notice me as I carefully made my way along the slick, algae covered rocks that lurked just below the surface. 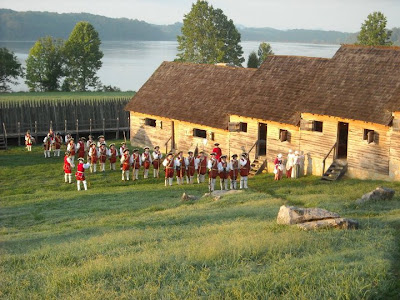 Saturday- Hot but with occasional breezes
Reverie at Seven of the clock, with the soldiers meeting on the parade ground at half past.

The colours were raised at Eight in the morning by a platoon of the men and we sang "God Save the King", as per usual.

At half past Eight guards were posted, including a guard at the Infirmary. As the guards were chang'd several times throughout the day, I would often know the fellow posted at the entrance, and we could seripticiously exchange a few jovial words as I went about my appointed tasks as Surgeon's Mate. 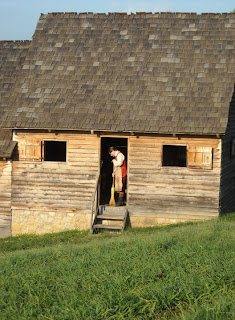 I swept the floors and dusted the apothecary bottles. Dr. Anderson and I also took the ticks and pillows off the Infirmary beds and shook them in the out of doors. I made note that they smelled a bit dusty, and that perhaps they should be laid out in the sun soon and perhaps even restuff'd with some fresh straw. There were also several nests of small rodents that had built up that I had to disperse.

The heat was such that several of our men went down. It was difficult to keep enough water ingested to combat the oppressively high heat. None were too serious to be life threatening.

About half past One, Dr. Anderson had been upstairs moving about for some time, and presently came down, took musket in hand and placed his hat upon his head and stepped out of the Infirmary. We did not speak as he left, but knowing my job as I do, I knew that when Anderson leaves, it means I am to stay and watch over things.

I shall let the Captain's own words tell the grizzly tale that followed:

"As everything seemed quiet everywhere & the Centrys had not discovered any Indians, Doctor Anderson & another white man went out, they had gone above Fifty Yards on the side of a little hill, till they were fired at by some Indians that were behind a little log: " 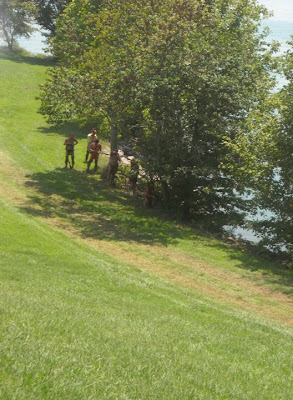 "That moment Forty or Fifty of the men run out with their arms to their assistance; but it was too late, for they were both dead and Scalped:" 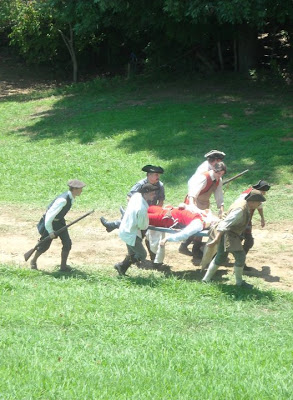 " ... immediately the Savages that were round the hills, fired at the Fort from all sides, but they were so well hid, that we could not have the Satisfaction of killing any of them."

Capt. Paul Demeré
June 6, 1760
We brought Doctor Anderson back up and laid him out on a bed in the Infirmary, for at this point, there was nothing I could do for him. All the Physick and Surgerie in the world could not undo what the Indians had done to him. I covered him with the wool blanket that lay at the foot of the bed. Anderson was dead. 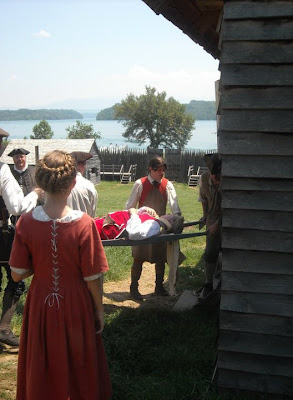 Ensign Boggs and a few of the men came in to pay their respects and some words were said over him. Boggs turned to me and let me know that I would be in charge of the Infirmary in Anderson's stead.

The guard changed, the sun beat down, and Anderson lay under his blanket for the remainder of the afternoon as I kept vigil there in the Infirmary.

Special thanks to Melanie Paniter and Ron Melton for the images.
No comments:

Upon a careful review of my schedule, it occurs to me again why it is important for me to write things down. Elsewise, I would never remember where (and often WHEN) I was off to next! Below fair reader, you will make a more perfect discoverie of my schedule for the coming months. 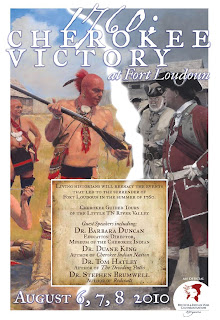 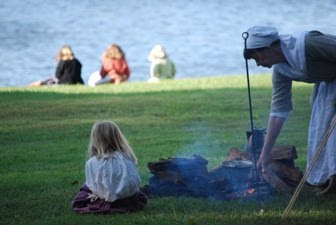 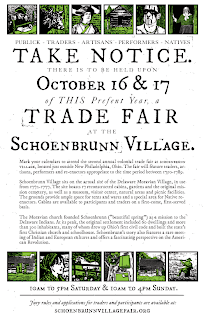