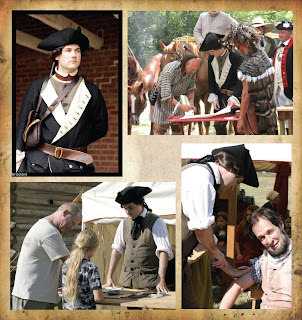 THE DOCTOR, having recently returned from the forted station along Mansker’s Creek, travels the savage frontier in an effort to educate and enlighten the settlers in the art and mystery of 18th-century medicine, or "physick" as it is commonly known. It is his belief that good health is tantamount to a strong and new nation, particularly one that signed its Declaration of Independence a mere four years prior.

The Doctor's strong suit is his ability to demonstrate period-appropriate medical "procedures" for the public. His experience in performing and teaching sleight-of-hand tricks has allowed him to "amputate" a leg, "draw" a tooth, and tend to "wounded" soldiers in post-battle triage.

For the gentler ailments, the Doctor prescribes plain and easy means for persons to cure themselves of all (or most) of the distempers incident to the period, armed with the latest techniques and apocatherian treatments.

The Doctor's presentations continue throughout the extent of his stay, whether he is attending to the public or walking about and interacting with other interpreters. Those who will please to favour him with their employ may depend upon the strictest attendance and attention to Economy. Contact the Doctor to schedule an appointment today!

A portion of a discussion the Doctor gave to a group of adults at
Fort Boonesborough in Nov. 2009 THIS may inform all whom it might concern, that herein is contained the most accurate description of the gentleman known as 'THE DOCTOR' as can be assembled. Please bear in remembrance that much of this knowledge comes from several of his known companions, tax receipts, ship manifests, apprenticeship contracts &c. as well as testimony from the Hart family & other eye witnesses to the deeds of 'the Doctor'.

Born in England, spent his youth in York and speaks very good English : Had on an old linen Shirt many times mended, the right arm of which still bears the warpaint from the face of a savage he dispatched some time ago, a pair of green Trowsers, a walnut dyed Waistcoat with black leather buttons upon its face, and a fine black wool Coat which is white on its interior and missing several of its pewter buttons, a pair of heavy brown Stockings with either a pair of riding boots or wax covered shoes, with a good Hat and Wig. He is often known to travel with a blue box that is believed to contain a few of his personal items as well as the medicines used in his craft.

Documentation for the Doctor's impression comes from:
Williams, Guy  The Age of Agony: The Art of Healing, 1700-1800

Every Man His Own Doctor: or, The Poor Planters Physician by John Tennent, 1734

Extracts from the Marine Practice of Physik and Surgery, Including the Nature and Treatment of Gunshot Wounds. Ranby 1776

Plain Concise, Practical Remarks on the Treatment of Wounds and Fractures, by John Jones, MD. 1776
A Discourse upon the Duties of a Physician, By Samuel Bard M.D. 1769 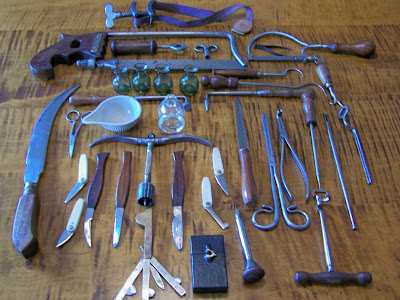 Where has the Doctor gone?

Winter's afoot, and it's this time of year that I always start feeling a little stir-crazy because I've been able to be 'The Doctor' on a fairly regular basis. But then cold weather comes on and the events dry up and sites start closing down for the season.

The first weekend in December there's a Christmas event at Fort Loudon that I've been invited to... and on top of that, I just agreed to be the guest speaker at the Charles Duncan Chapter of the Kentucky Society Sons of the American Revolution's Christmas Dinner.

So that'll give me my fix for December just before Christmas. Then I imagine it'll be a few months before I'm able to don my garb and be the Doctor again. Bwah, that sounds depressing.

SO, in an effort to perk myself up, perhaps I ought to mention some things I'm looking forward to next season...

Martin's Station Raid, Ewing, VA.- I spoke with one of the guys that does a top notch indian interpretation... and he wants to do some sort of scenario with the Doctor. He mentioned several ideas that sounded really good. I'll update you on those as time draws closer.

Traveller's Rest, Spring Sampler, Friday, May 1, 9:00am-4:00pm- I'm hoping that this event doesn't overlap with anything else... I really enjoyed going out there and would love to get to go back.

Not to mention that there are events at other sites that I'd like to give a shot to this next year... one of those sites is Red River.

I have also updated my listing of sites of some import along the left hand side of this page. Visit them at your leisure and let me know what you think of them!
No comments:

As a shameless ploy to beef up my Doctor's kit with the items I'd really love to have, I've updated the "Wish List" just in time for Christmas! How's THAT for subtle?

I noticed that G.G.Godwin has updated their website... so in an effort to spare confusion, I've updated my links accordingly.
No comments: 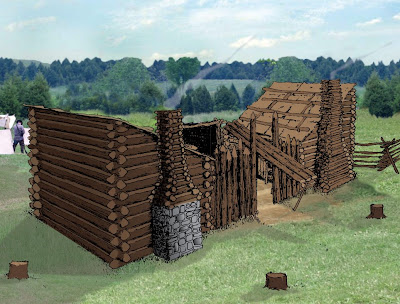 This is am image by Gerry Barker of a two family station of his own design. I scanned the image and colored it using samples taken from real photos just to see what it might look like finished. 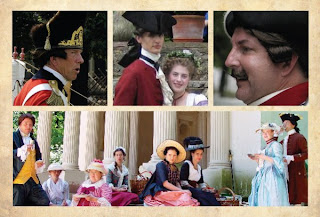 There's some really good photography from various events floating around out there... I thought I'd post some links to a few of the photographers whose stuff I've been looking at lately.

The event with all the soldiers takes place yearly at Colonial Williamsburg... it's called 'Under the Red Coat'. It recreates 10 days in 1781 when the British took over the town and declared marshall law. I want to get to attend this event in the worst kind of way... but you have to go as part of an established unit.

This other photography appears to be in Europe. Germany, I think. 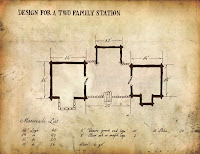 I HAVE HAD, placed into my very hands some time back, drawings for a new two-family station. The plans were writ by the hand of mr. Gerry Barker, a wagoneer of some note. I shared a camp with mr. Barker and his companions at the Fair at New Boston August last.

UPON THE SKETCH, he outlines the dimensions for each building, the layout of the thing, and the materials, in log and stone, that would be required to build it. It consists of two family dwellings on either side, and an open paddock for animals between them. All openings between the buildings are enclosed by a wall.

I HAVE VOLUNTEERED to assist in the construction of said station. While I have assured mr. Barker that I have none of the skills or knowledge required to complete such a task, I am very eager and follow instruction well. I am afear'd that my training as a physician has left my construction and carpentry skills sorely lacking.

IF NOTHING ELSE, perhaps I can stand watch with a firelock and keep an eye out for the local savage. I await word from mr. Barker and his associates as to the time and eventual location upon which we shall meet to undertake this endeavour.
1 comment: 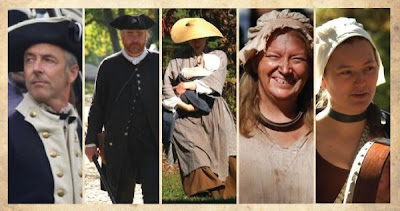 Images from the Locust Grove Fair are up at the Graphic Enterprises site. They have a very thorough visual report, and lots of links to past events there at the site.

You can examine the images for yourself by visiting their site: